This has not been a good year in the garden for Me.. Most of the food stuffs I planted, did not take very well. Unlike last year, we didn’t work any compost or peat moss into the raised beds. I think that, in combination with the nearly two month delay in the arrival of spring, immediately followed by several weeks of extreme heat, really set things back. The carrots and parsnips have been puny and pathetic. The peas and beans have grown in a rather lack-lustre manor and the peppers, bak choi, spinach and tomatoes have been a joke. Even My citrus trees suffered from the odd weather. I started putting them Outside once the temps at night seemed to stop going below 55 degrees. Only to have My older keifer lime and younger blood orange bitten by frost. Happily, both have bounced back very well. Unlike the apple tree, which openned most of it’s flowers in a beautiful display, on a day temps dippped into the 30s. Needless to say, at least 75% of the pottential bounty promptly died off. With such slim pickings, the squirrels, who usually get most the apples, have taken nearly all of them.

I planted two varities of tomatoes for 2012, a cherry type called Gardener’s Delight and Cherokee Purple, which is often compared to Brandywine, but with a more robust flavor. Both were started in planters, indoors, late in the winter as usual. Then, spring didn’t bother showing up and they started dying. So I planted another round and waited for the weather to start warming, but it didn’t. Seven weeks after the ‘normal’ planting time, and 5 weeks after starting the second round of tomatoes, I finally put some in the ground. I should have just sewn in seeds, but I planted the best looking of the seedlings I had growing, even though they were stunted from being in tiny starter planters for 5 weeks. After 2 weeks showing no signs of change, both varieties started growing! The first flowers did not appear until the end of June. Both plants grew to about 2 feet, kicked out about half a dozen flowers and are yeilding 3 to 6 tomatoes. They have stopped growing taller and aren’t really flowering. It’s sad… Last Year I grew a pair of Hybrid Zebra Cherry Tomatoes, which are a cross of green and red zebra stripe cherry tomatoes. They grew taller than Me, delivering 1200ish amazingly yummy little morsels. Needless to say, I am quite disappointed in this year’s crop. Then, the very day I was going to pick My three Cherokee Purples, some hateful little critter stole two of them! Leaving them, partially eaten, on the ground nearby. So My crop is a solitary, scarred tomato that grew to only half the size of a usual C. P. 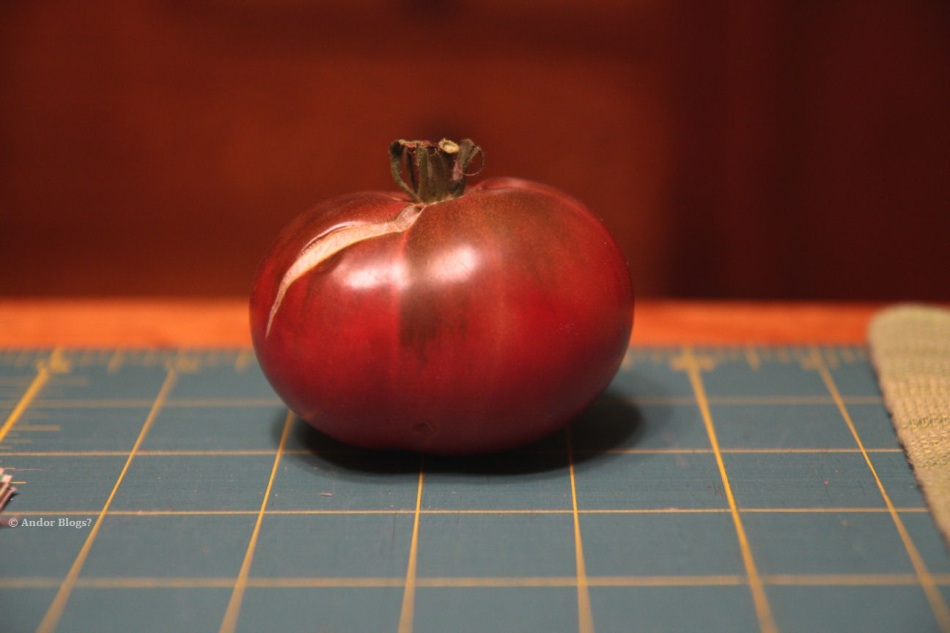 And so, in the twilight hours of the last day in July, I partook in the suprizingly delicious little thing. I’m not really a tomato person.. I grow them, mostly, cause they are good for You. But this thing was really good! I however, did it no justice. With My stomach growling, I broke out some tortillas, cheese, spinach and some ‘pulled bbq chicken’ from a plastic tub. It was pretty good, for a 4am food excursion. While eating it, I just couldn’t help but feel like I should have made something, well, better.. I wasted the best tomato I’ve ever tasted, the single fruit of My months long labor, on a bit of pre-packaged, over sugar’ed, microwaved, remnants of meat. At least I ate some of the tomato and snapped a couple pictures before constructing dinner. If things go better next year and they give more bounty and viable seeds, I’ll grow these Cherokee Purple Tomatoes forever! 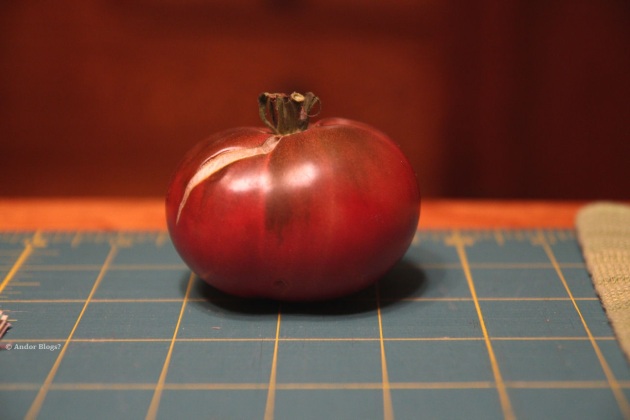 This entry was posted on September 1, 2012 by Andorius. It was filed under Photography, Random Thoughts and was tagged with cherokee purple, delicious, food, fresh, garden, home, home grown, st paul, tomato, vegetables.