Cooking in the Twilight Hours 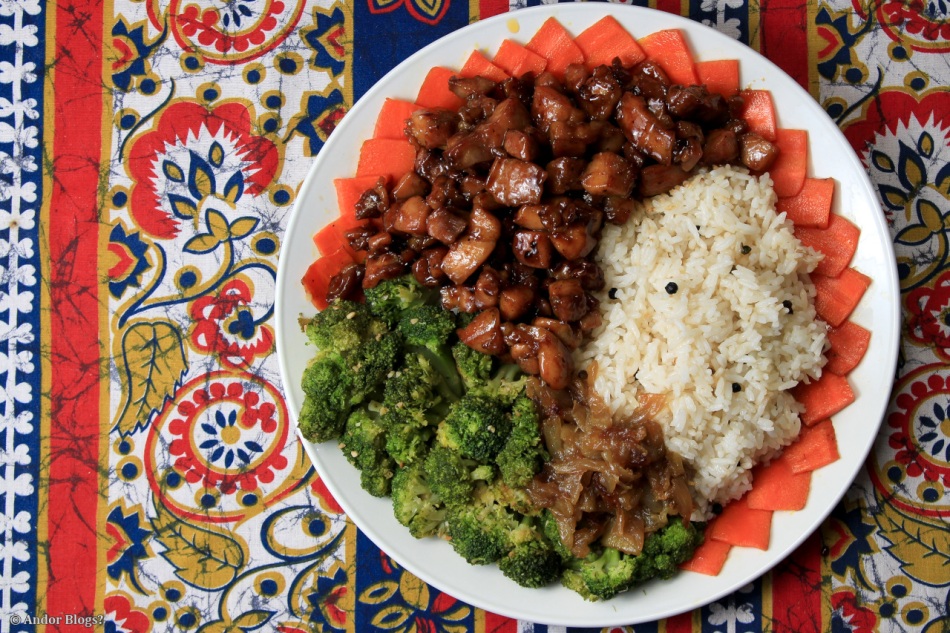 I often find Myself cooking between two and four in the morning. Not sure why, but this is when the proliferation of stir-fried creations tends to happen. In this case, a very simple set of ingredients lead to yet another delicious meal. Chicken in a salty caramel sauce, lightly fried veggies, caramelized onions and peppercorn rice. The chicken is a bit of a rip on a Vietnamese style Ga Kho, or as most of us call it, hot and spicy chicken. I simply omitted the fish sauce, lemongrass and ginger instead using seasoned salt. The rice was quite nice. It’s subtle, like sushi rice, until You bite on a peppercorn. If You use white pepper, it will be quite spicy. Other varieties emit a mild peppery flavor, but most of the bite dissipates while cooking. The onions took Me three hours to get to that amazingly sweet, gooey texture. If You skip that part however, this meal can be prepared and cooked in thirty to fourty-five minutes. Even faster if You make the chicken in one pan and the veggies in another.

For starters, chop up 2 medium to large onions and cook over low heat until caramalized and set aside. Don’t worry if it looks like a lot when You start, they will be dramatically reduced as You cook. This can take hours, but it is so worth it.

In Your rice cooker, or pot, add 1 cup of rice and 1 tbsp whole peppercorns, mix until the pepper is evenly dispersed. Then add 1.5 cups of water and 1 tsp of rice vinegar. Mix thoroughly and cook until the rice has reached Your desired texture.

While the rice is cooking, thinly slice a medium sized carrot and fry over medium heat to Your liking and remove from the pan. Then, stir fry 1 cup of brocolli with 1 cloves worth of minced garlic and a splash of soy sauce. Once finished, remove from the pan and wipe it clean.

Now, over high heat, stir fry 2 chopped up chicken thighs with 1 tsp rice vinegar, half a tbsp of lowry’s seasoned salt and 2 tbsp(or more!) of brown sugar. Cook until You have a thick brown caramel glaze and You are done. Enjoy!